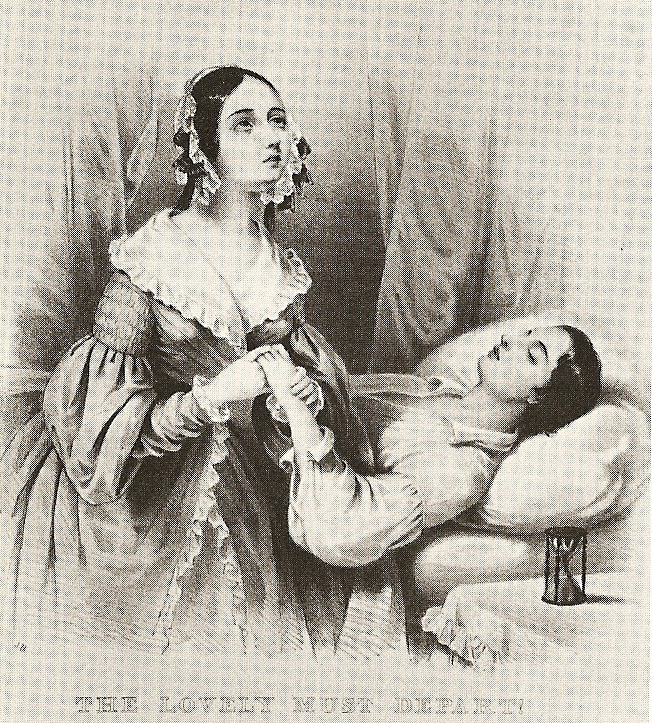 Among the common magical beliefs that swirl around childhood is the tacit understanding that those whom we love die peacefully in their sleeps. Children cling to the perfectly painless death theory as part of their narrative of a just world. The child imagines the dying person quietly going to sleep, beginning with the pajamas, followed by the teeth-brushing, the removal of the worn pink pom-pom slippers, and the pushing back of the sheets and blanket to lay down for a perfectly ordinary night’s sleep. Soon the dying one is off in dreamland (of which I’m sure our young fantasizer can say much), unaware of gentle Death delicately floating into the chamber and graciously taking the sleeper away. Our beloved dier (now departed) felt no pain. She simply ceased.

It’s unclear if the death-fantasy is fabricated by the child or the adult, but either way, parents often comply with the story, having little else of comfort to say. So, the “she died peacefully in her sleep” mythology continues, fanning across children through the generations.

Jane Eyre is a novel unafraid of tunneling into dark spaces; yet, when it comes to the deathbed scene of Jane’s beloved friend Helen Burns, Charlotte Brontë chooses to avoid an honest exploration of tragedy and instead perpetuates the death fantasy.

As the details of Helen’s long deathbed scene may be foggy to you, dear reader, I will summarize:

Lowood, the dreadful school Jane attends, is ravaged by typhus – forty-five out of the eighty girls fall ill. Jane, by good fortune, is spared. And so is Helen Burns, Jane’s dear friend.  Smart, kind, and slow to anger, Helen embodies the 19th century “good-girl.” Unfortunately for Helen, she’s the perfect candidate to assume the role of the “too good for this world” character taken home to Jesus too soon. Rather than hurling typhus at her, Brontë awards Helen with consumption, a rather romantic sounding disease that affords the victim the honor of wasting away beautifully, a fitting death for the angelic friend of a Victorian heroine (think Nicole Kidman in Moulin Rouge). Today, of course, we call consumption tuberculosis, a common lung disease in the 19th century. While “wasting away,” or weight loss, is a side-effect of tuberculosis/consumption, it is not ultimately malnutrition that whacks you out of this world into the next, but suffocation. It is a lung disease after all. Not very romantic.

So let us now visit the death chamber of poor Helen Burns, where Jane Eyre has managed a secret nighttime visit. The conversation that ensues between Jane and Helen inverts the expected role of the living as comforter to the dying; rather, Helen assumes the task of comforting Jane who, still a child, expresses terror in anticipation of her own mortality. Hours from her death, Helen assures Jane that God is real, Heaven exists, death is painless, and that the two friends will meet again in Paradise. In her longest speech, she says the following:

“I am very happy, Jane; and when you hear that I am dead, you must be sure and not grieve: there is nothing to grieve about. We all must die one day, and the illness which is removing me is not painful; it is gentle and gradual: my mind is at rest. I leave no one to regret me much: I have only a father; and he is lately married, and will not miss me. By dying young, I shall escape great sufferings. I had not qualities or talents to make my way very well in the world: I should have been continually at fault.”

A lovely speech, comforting to both Jane and the reader; unfortunately, it’s pure bullshit.

Five hours from death by lung disease… death by suffocation, and Helen just spoke 105 words in a row. 105 words – I’d call that a monologue. You could stick her speech on a stage (which I’m sure has been done). You could use it for an audition. These aren’t a few grunts between breaths but a full speech – practically Hamlet.

In total, Helen manages 311 words to Jane during her final hours… an unlikely scenario from someone a handful of gasping breaths away from death.

Although I’ve never visited the deathbed of a person with tuberculosis, fourteen months ago, I witnessed my mother’s deathbed – which was not exactly a bed – but a couch, then a chair, then a bed, then the chair again, then a couch. Unlike Helen, my mother’s mind was not at rest and the death lacked all the gentle politeness Helen was granted. While Helen lay peacefully on her bed in her final hours, my mother moved about in agonzing agitation seeking a comfortable space that continued to elude her, and never involved lying down fully as the pressure on the lungs is eased when one sits up a bit. We opened windows, letting in the late November air, removed clothing, and blew fans on her face to create the illusion of breath.

Despite the constant movement, my mother, unlike Helen Burns, spoke not 311 words in the last forty hours of her life, but one word. The one wasn’t “love” or “father” or “light” or “God,” or “Paradise,” but “No.”  Muffled but desperately powerful, she gathered incredible strength to gasp her objection as simply as possible as the nurse, my sisters, my father, and I tried helplessly to  move her from chair to bed. Whatever we were doing was terrible and her “no” meant to stop.  Did she wish to say more? I doubt it. She was too busy trying to breathe. LIke tuberculosis this was a death by suffocation. Words are a luxury not granted to those in the act of dying.

LIttle about the death chamber(s) reminds me of Helen Burns’. Yet, both my mother and Helen Burns died deaths by suffocation. Helen’s 19th-century consumption replaced by COPD. No part of Helen’s insistence that “the illness which is removing me is not painful; it is gentle and gradual: my mind is at rest” applied here. A few weeks earlier, when my mother still had enough breath for words, she told me: “I thought death would be more gentle.”

So what is Charlotte Brontë doing? By the time Brontë wrote Jane Eyre, at age thirty, she knew death. At five she lost her mother, and at nine she lost two sisters to tuberculosis at the Clergy Daughters’ School at Cowan Bridge upon which Lowood is based. Had nine-year old Charlotte sat at the deathbeds of her two sisters? Is Helen Burns’ death bed scene a fantasy for Charlotte, a dream of what she wishes her sisters’ deathbeds looked like? Is Charlotte offering her young readers a fairy tale of death to calm their troubled minds? Is Helen’s death a gift to all of us from Charlotte Brontë, granting us an image of a good death? Or is it a gift to herself, a delusion she has created to ease her fears about her sisters’ deaths and her anxiety about her own inevitable one?

Eight days ago, I watched my cat Jayna’s use of her legs abruptly abandon her, likely the result of a stroke. It was not a death by suffocation, but it was a death. My children, 10 and 7, watched her suffer, but somehow they didn’t see it the way I saw it, insisting that the vet could fix her. She was dead before morning. And the children quickly concocted a story of a peaceful death for Jayna. She died in her sleep. A gentle death. A death without suffering. A Helen Burns’ death. I lay by Jayna on the floor all night. I was there. I know that’s not what happened, but I said nothing.

One thought on “Jane Eyre and the Death Fantasy”