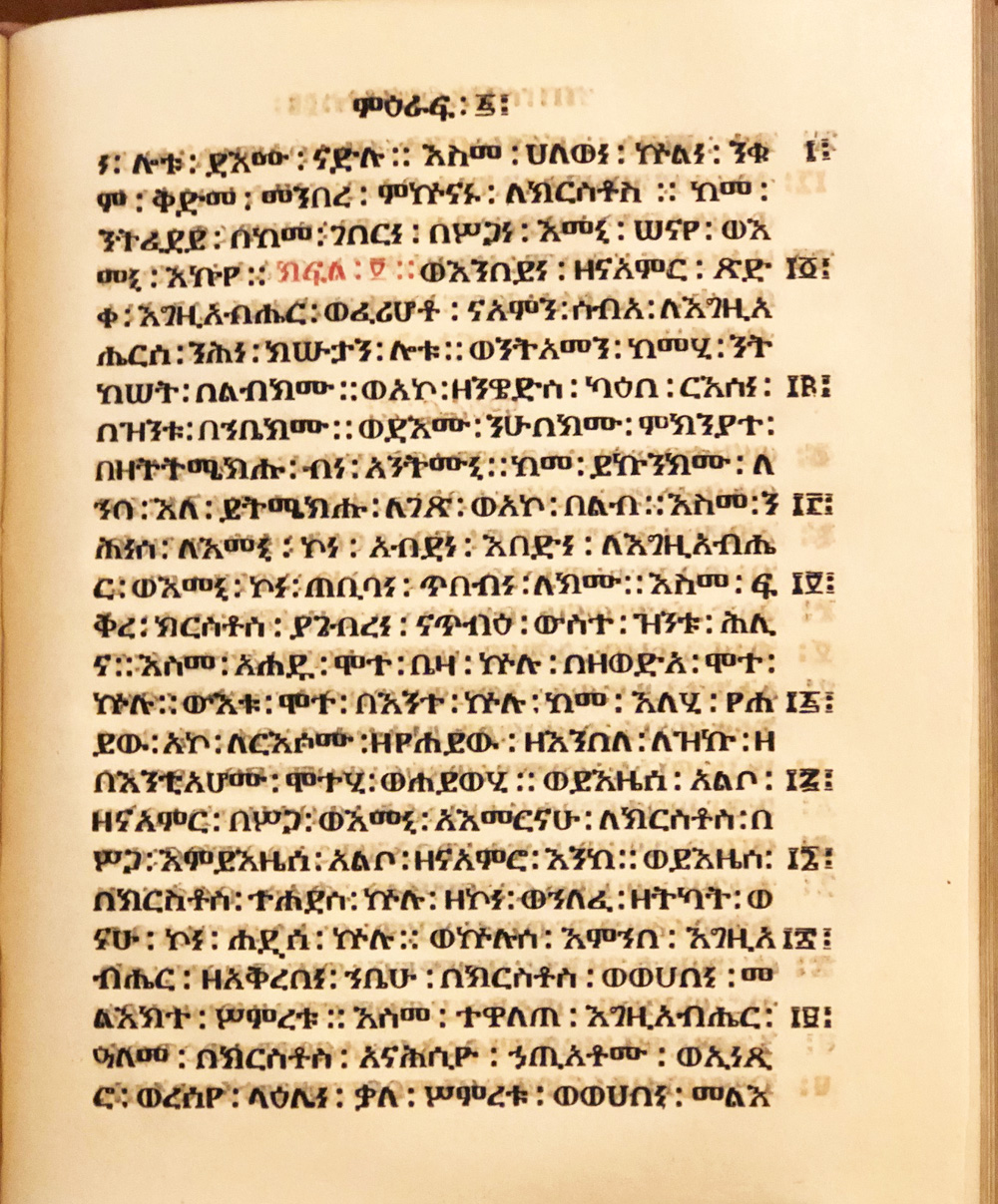 Isn’t this striking? [See illustration on left.] It’s from an early nineteenth-century translation of the New Testament into the Ethiopic language and script (now more commonly referred as “Ge’ez”). I’ll get back to it later.

One of the most striking aspects of the world we inhabit is the way in which it is crammed with every conceivable variation on every particular theme. The early-twentieth-century historian-of-ideas Arthur Lovejoy first identified this as a central theme in Western philosophy, calling it the Principle of Plenitude (in the Universe, “the full range of conceivable diversity of kinds of living things is exhaustively exemplified”), and traced it back to Plato.

I began thinking about plenitude long, long ago, when I first came across Raymond Queneau’s Exercices de Style (1947), in the English translation by Barbara Wright that was originally published by the Gaberbocchus (Latin for “Jabberwock”!) Press. (John Updike criticized the translation as too British and not sufficiently up-to-date; in my view understandable defects for a book published in Great Britain in 1958.) What Queneau — later one of the founding members of the school of literary playfulness known as the Ouvroir de littérature potentielle, or Oulipo for short — undertook in his book was to narrate a single trivial incident taking place on a rush-hour bus in 100 different ways, using a variety of styles — metaphoric, passive, exclamatory, telegraphic, subjective, precise, visual, tactile, poetic, and so forth. (A similar undertaking — a meta-variation on Queneau’s 100 variations — is Matt Madden’s “99 Ways to Tell A Story” (2005), in which another short incident is told 99 different times, graphically, in different comic-strip styles.)

It is a tremendous stimulus to creativity to think about Queneau’s central insight — that there are an enormous; indeed, let us say an infinite, number of ways to do any one particular thing. The itch that this insight planted in my mind led me, after I had begun book-collecting in earnest, to form a largish but certainly non-systematic and non-comprehensive collection of different forms of writing. I took this on as a side-activity, buying examples in a desultory fashion, as opportunity offered itself. The ultimate goal was to form a sort of Exercices de Style — or, let us say, a Kama Sutra — of writing.

One component of this collection comprises books on typography and calligraphy, sticking strictly within our standard Roman alphabet. How many ways there are to write a capital “A,” even if we stick to printed rather than handwritten versions! Bembo, Goudy, Helvetica, Bodoni, Optima, Times New Roman, Didot, Plantin, Palatino, Caslon, Callisto … the list goes on and on, each with its own distinctive beauties. It is easy to find examplars of these typefaces; printers have, since time immemorial, illustrated the capabilities of their presses by publishing “Lorem ipsum”-type compilations of fixed texts printed in various typefaces.

The game gets even more fun (funner?) once one gets beyond the Roman alphabet and looks at the alphabets, syllabaries, and other scripts used to write languages other than those of Western Europe. The best possible starting place for exploring such scripts is the website of the Unicode Consortium, whose project it has been to develop computer encoding standards sufficient “to support the writing systems used by all the world’s languages.” Browse, for example, the code charts available at www.unicode.org/charts/. (You’ll find Ethiopic at https://www.unicode.org/charts/PDF/U1200.pdf.) But I am a collector of physical artifacts, not digital data, and over the years I’ve managed to find numerous printed and manuscript exemplars of non-Roman scripts. 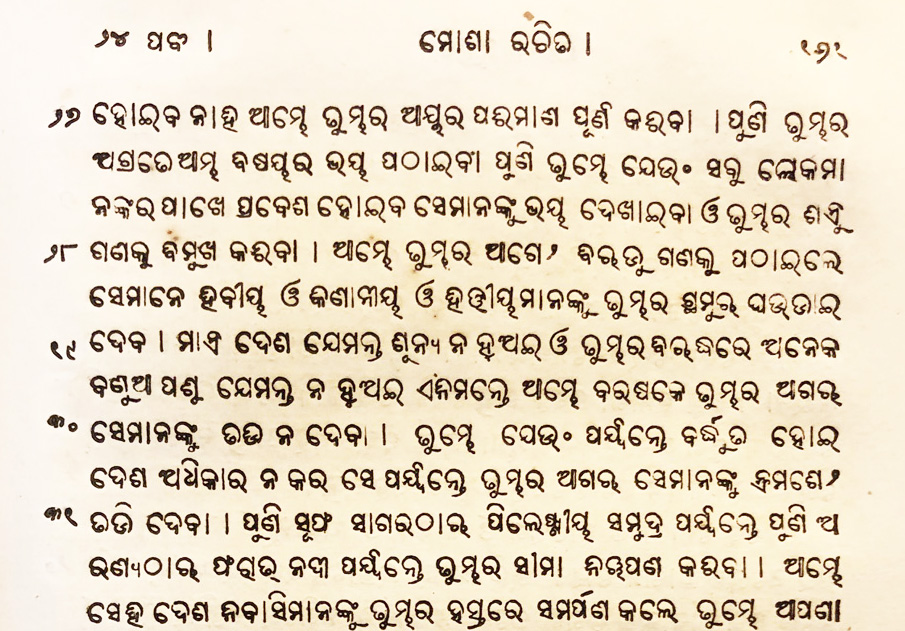 Oriya script from “The Holy Bible in the Oriya Language” (Orissa Mission Press, for the Calcutta Auxiliary Bible Society: 1842).

The richest source for this sort of thing is the translations of Bibles, hymnals, other religious texts, and grammars that were a product of missionary movements, from the seventeenth-century Jesuits to modern Mormons. My Ethiopic New Testament is an example; published by the “Societatis ad Biblia Sacra in Britania.” Then there are those wonderful books in which some salient religious text, such as John 3:16 or the Lord’s Prayer, is printed in dozens or hundreds of different languages. There have been numerous projects of this nature; my favorites are the beautiful productions of the Armenian monastery of St. Lazarus, located on a small island in the Venetian Lagoon. (My copy is the 1862 edition, Preces Sancti Nersetis Clajensis Armeniorum Patriarchae Triginta Tribus Linguis Editae.) One of my earliest purchases was John Chamberlayne’s Oratio Dominica in diversas omnium fere gentium linquas versa et propriis cujusque linquae characteribus expressa …. (1715) (the title goes on and on, as eighteenth-century titles tend to), which prints the Lord’s Prayer in Georgian, Siamese, Ethopic, Gothic, Runic, and a number of other languages. I might also mention a manuscript notebook compiled in the 1880s, in which the Reverend J.M. Connelly of the Propaganda Fidei in Rome asked his students — who had come to Rome from all around the world — to write out the Lord’s Prayer in their native tongues. He provided them with pages pre-printed with red decorative borders for this purpose, and then bound the 55 pages into a notebook.

Indeed, why limit yourself to real alphabets? There are a number of alphabets invented primarily for literary or dramatic purposes, such as Klingon, Elvish, and the examples offered by Dr. Seuss in On Beyond Zebra (1955). Others were invented in the hopes that they would be adopted and bring about the millennium through spelling reform or the elimination of barriers between nations — such as the George Bernard Shaw’s phonetic alphabet or John Wilkin’s An Essay Towards a Real Character and a Philosophical Language (1668). Still others occupy a shadowy borderland between the imaginary and the actually-utilized, such as the Mormon Deseret Alphabet, which was used to print only four books, and then abandoned.

But, for that matter, why stick to alphabets and syllabaries at all, limited, as they are, to the representation of verbal information? Think about the other ways in which writing systems can convey information. Consider, for example, musical notation (see Elaine Gould’s 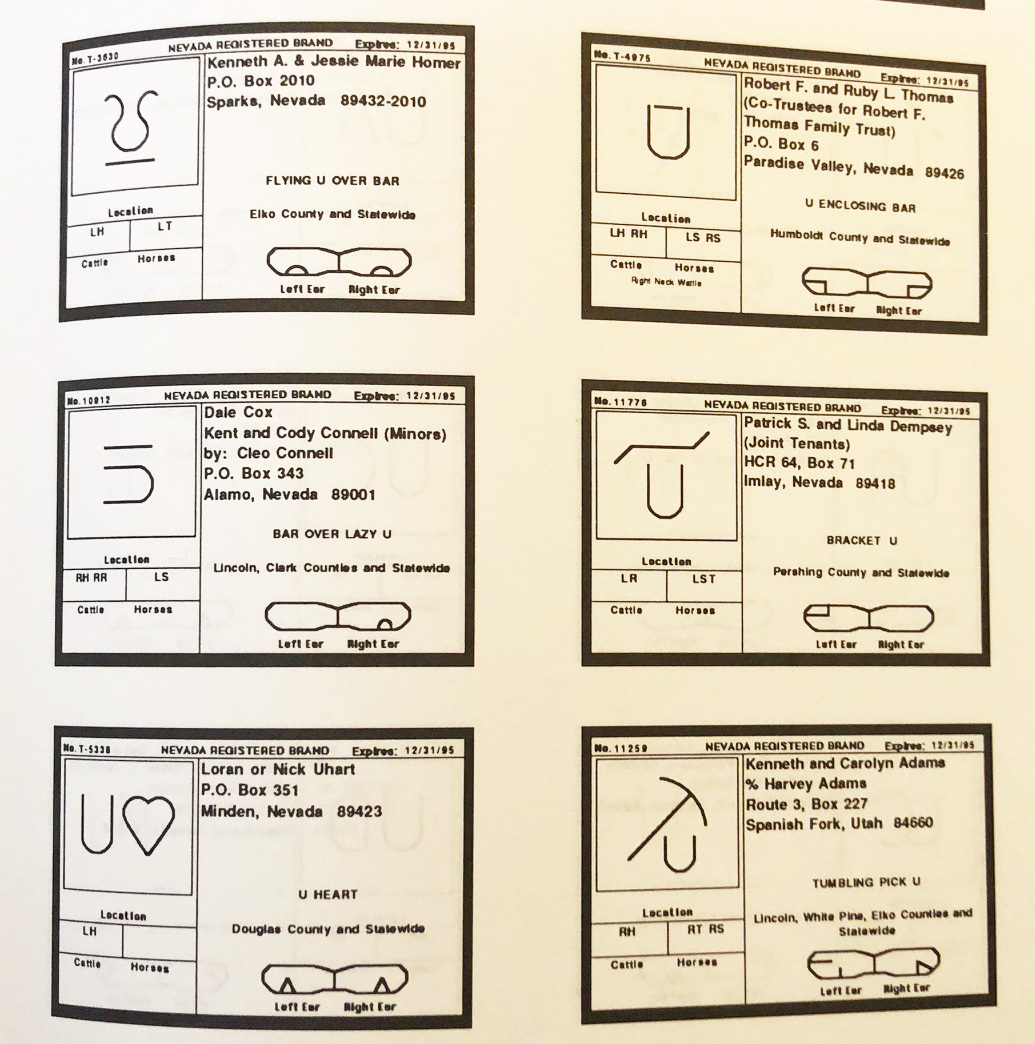 Behind Bars: The Definitive Guide to Music Notation (2011)), mathematical notation (Whitehead and Russell’s Principia Mathematica is a great place to start), choreographic notation (see Albrecht Knust’s A Dictionary of Kinetography Laban (Labanotation) (1979)), or cattle brands (I recommend the Nevada Livestock Brand Book — various editions; mine is 1992). Leslie Charteris, the author of the “Saint” books (see the TV series starring a young Roger Moore, in his pre-Bond days), invented a “Universal Sign Language” that he called Paleneo (1972 — I have a copy of the book inscribed by Charteris with some of his symbols).

And, for that matter, you can think about how many ways chunks of writing — along with illustrations and metadata such as page numbers and indices — can be assembled into that artifact that we now call a “book.” To get you thinking about this, I recommend starting with One Book/Five Ways: The Publishing Procedures of Five University Presses (1978), and Marshall Lee, ed., The Trial of 6 Designers (1968), in which six designers each present their versions of a few pages from the beginning of Kafka’s Der Prozess. 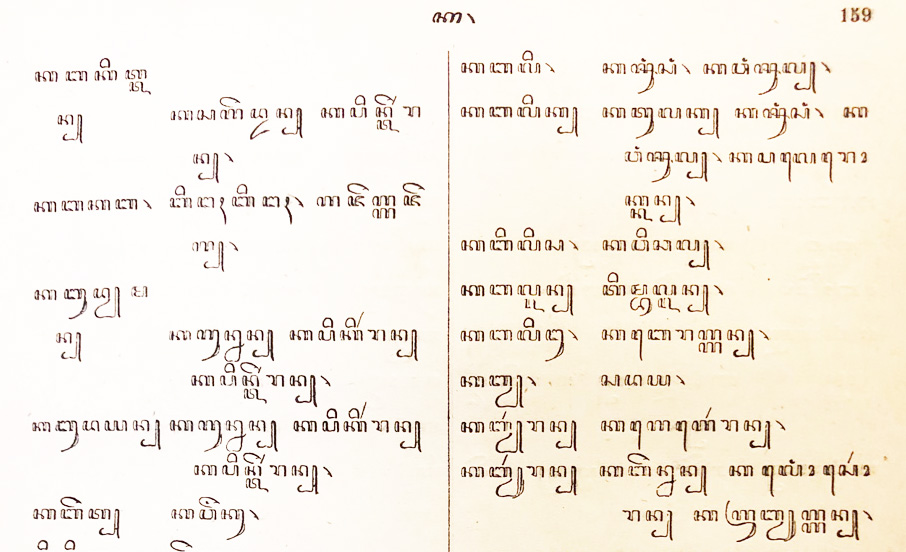