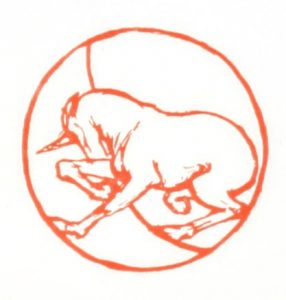 The symbol of the press: A unicorn seal. In each Cuala Press publication, this is printed on the page preceding the title page.

This book seemed so unassuming, hiding amidst a sea of leather bindings and gilt detailing. But, like many things, it was its quietness, its aesthetic austerity, if you will, that caught my attention. I began to notice little, intimate details: the hand-printed labels, the delicate baby blue boards, the handmade pages, and the vibrant red unicorn seal.  Turns out its form so beautifully mirrors its story, as it is a powerful narrative that has yet to gain the attention it truly deserves. 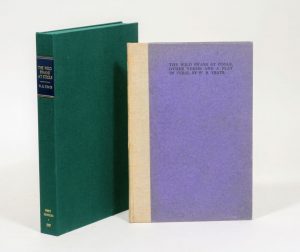 The Wild Swans at Coole, Other Verses and A Play.  Written by W.B. Yeats

Our story centers around the publishing house that first printed The Wild Swans at Coole. Originally called the Dun Emer Press, this private Irish press came into being in 1902.  The press, in fact, was actually one part of a larger whole: Dun Emer Industries.  This production was the brainchild of Evelyn Gleeson, a London transplant who had studied embroidery and weaving, hoping to provide an education as well as employment for young Irish girls. These sort of workshop conglomerates were integral to the foundation of the Arts and Crafts movement, a 20th century British and North American-centered artistic campaign that advocated for social and economic reform by way of producing and selling handmade goods.

Enter, Elizabeth Yeats, sister of poet W.B Yeats and business partner of Evelyn Gleeson. Armed with an education–she had recently completed a printing course at the Women’s Printing Society in London–and a an unstoppable team–close friend Emery Walker acted as confidant and W.B. Yeats as General Editor–Elizabeth began the Dun Emer Press. Miss Gleeson and Elizabeth Yeats parted ways in 1908, but the principles behind and aesthetics of the press remained the same even after the split. It was after the separation that Dun-Emer Press was renamed the Cuala Press.

The Cuala Press was responsible for the publication of countless important works, including many by W.B Yeats, J.B Yeats, Ezra Pound, F.R. Higgins, Frank O’Connor, Katherine Tynan, and Douglas Hyde.  For a small press with an even smaller readership (there were usually a standard 500 copies of each book printed), the list of represented authors reads all the more impressive.

The press did not merely concern itself with books, however; it was also concerned with broadsides, which are sizable sheets of paper that typically have ballads printed on them. Each Cuala Press broadsides had a similar layout. The sheets contained traditional Irish or original verse, accompanied by stunning hand-coloured drawing by Jack Yeats, brother of Elizabeth and W.B Yeats.  The broadsides were printed monthly, but were often collated and printed in series as well.  These series were limited edition–usually limited to 150 copies–and signed by W.B Yeats and F.R Higgins. By bringing the Irish folk songs of the past and pairing them with Irish art and poetry of the present, the Cuala Press made one truth explicit; they, and the authors and artists they represented, were next in line in a great dynasty of Irish art. 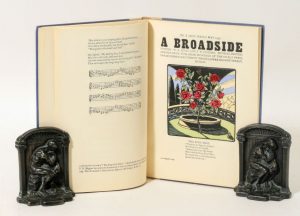 Broadsides, A Collection of New and Old Songs, 1935.

However, it is not just the Irish nationalism that the Cuala Press aroused which makes them so significant.  Extracted from a brochure printed at the press, this passage so fittingly sums up the aims, and perhaps most notably the legacy, of the Cuala Press:

“ … the idea is to make beautiful things; this, of course, means materials honest and true and the application to them of deftness of hand, brightness of colour and cleverness of design. Everything as far as possible is Irish, the paper of the books, the linen of the embroidery and the wool of the tapestry and carpets. Designs are also of the spirit and tradition of the country. The education of the workgirls is also part of the idea; they are taught to paint and their brains and fingers are made more active and understanding. Some of them, we hope, will become teachers to others, so that similar industries may spread through the land.”

The books and broadsides are undeniably beautiful. From their hand-stamped labels to their rich watercolor illustrations, the publishing house clearly valued craftsmanship and artistry.  Yet, what strikes me about this press is not simply their aesthetics, but instead the principles which guided their practices.  In a pre-Hogarth Press, pre-Virginia Woolf era, they did what many deemed impossible: they gave women a purpose, and a public.  W.B. Yeats’s editorship certainly didn’t harm the campaign, but it was the work of women–Elizabeth Yeats, Emery Walker, and countless, unnamed, unknown others–that helped to create a press that would extend well beyond W.B Yeats’s lifetime.

That simple fact is, quite certainly, a beautiful thing.

So, next time you read W.B Yeats, remember the ladies–the named and unnamed, the famous and the unacknowledged–that not only brought W.B Yeats’s work to the forefront, but also the work of many other great Irish writers that we have the privilege of enjoying today.

Like the photos? Intrigued by the history? Here are the links to the books, available for purchase on the Manhattan Rare Book Company website:

(Yeats – The Wild Swans at Coole)

One thought on “Making Beautiful Things: The History and Legacy of the Cuala Press”